Nokia is quietly smuggling itself back to the mobile market again. An high-end version of the latest series of Nokia branded smartphones by HMD. which is still in the incubator has enter the “leaking news mode”, of course you understand what we mean. 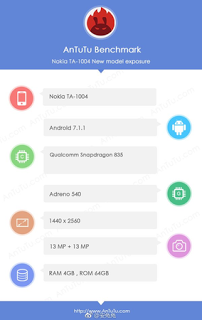 Nokia 9 is the high-end version smartphone we are talking about. The device recorded good scores of 2255 on the single-core test and 7770 on the multi-core test when benchmarked on Geekbench.

Recent test on the AnTuTu benchmark site disclosed some specifications attributed to the device.
As seen on Geekbench, the model number Nokia TA-1004, which is also the same Nokia 9 we are talking about has the following features, according to AnTuTu:
Display – it has a resolution of 1440 x 2560.
Screen size – not actually stated but it is expected to be around 5.3-inches.
Hardware – AnTuTu states the Nokia 9 would be powered by the current Qualcomm’s high-end SoC, which Snapdragon 835 chipset. This means the smartphone would be equipped with an octa-core CPU and the Adreno 540 GPU. It is said to also feature 4GB of RAM inside with internal storage of 64GB.
Camera – it comes with 13MP for rear and front.
OS – Android 7.1.1.
The Nokia 9 could be officially unveiled later this month.
AnTuTu.
ALSO READ:  Huawei nova 7 Pro Specifications and Price
Advertisment

Checkout All the Android Q Features Announced by Google at I/O...