By Andre Falana On Jun 19, 2017
Share
Join Us On Telegram
It’s barely a month that these two tech elephants, Apple and
Microsoft shook the whole planet by launching new high-performance devices.
The tablets includes the latest iPad pro models and the new Surface Pro. 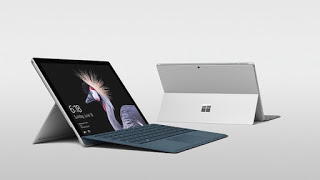 These new devices are touted to be capable of eliminating your
love for laptops but aimed at those who love creativity and willing to tear
their pocket for them.
Although, these gadgets are pretty poles apart, in terms of software
and hardware, but Apple and Microsoft battle each other to see who takes the
larger portion of the market share. And the truth is they are both set out to meet similar consumers’ needs and urges.
Going to the reason for this post, the General Manager for
the Microsoft Surface family, Ryan Gavin, claimed in a latest interview that the
iPad Pro by Apple was a “clear example” of following Microsoft’s work in the
category of 2-in-1 devices.
Related Posts

“Think about it,
if we had been looking at [Apple] we wouldn’t have made a product like Surface
Pro or Surface Book,”

“We have been learning and
perfecting our products in the 2-in-1 category for years now, [but] when
Surface initially launched everyone was skeptical, including them. And then
they followed, and the iPad Pro is a clear example of that,”Gavin said.

Garvin claim might be true due to Apple’s polished effort on
iPad to looks like that of Surface Pro line.
At this level of innovation, it’s hard to suggest which of
the two devices can completely take over the work of a laptop, not to talk of
the resemblances between the two.
Currently, I can only say that the iPad is better categorized
as a tablet than a PC, when likened to the Surface, knowing that the latter works
more on a PC-like OS, Windows 10. This simply, means hyping the iPad Pro as a
computer might look a bit of drifting away from the PC world unconsciously. Though,
some PC/laptop-like and Mac-centric feature like the file management optimizations
and some other features, such as the apps dock which iOS 11 will convey to the
iPad suggests that Apple has just started entry hybrid devices.
But the truth is, whether Apple stole the idea from
Microsoft for the campaign of its high-end iPad or not, it is the development is
nice and would like to hear more.
Meanwhile, we will need to wait for the kick off of iOS 11
features on iPad before one is convince if iPad Pro is capable of kicking out
laptop from this world.
iPad ProSurface Pro
Share

Nokia 3 Specification and Price. A budget phone that has it all