TellForce Blog
Home OS Android HMD Global launches Nokia 6 smartphone in the US
Twitter
Pinterest
Linkedin
ReddIt
WhatsApp
Tumblr
Email
Print
Telegram
Advertisement
Nokia 6 has just been announced by HMD Global and will be received
in the US in early July. The smartphone is the first Nokia-branded Android
handset produced by HMD, and it suggested the coming back of Nokia to the
mobile market. 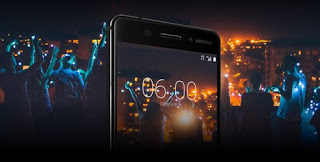 The Nokia 6 will be obtainable via Amazon in Matte Black and
Silver color variants, and it will be sold for $229. The Nokia 6 smartphone
will also be made available in Tempered Blue and Copper, towards ending of this
summer but no exact date has been set for the two colors. HMD Global has unfortunately
refused to mention whether the United States will get the Arte Black edition
anytime soon.

The Nokia 6 is an exceptionally nice mid-ranger, clothed in an
aluminium uni-body. It emanates with a 5.5-inch 1080 x 1920 pixels LCD display,
protected in Gorilla Glass 3. The smartphone is powered by Snapdragon 430, a
mid-level Qualcomm processor. Talking about its memory, the Nokia 6 handset comes
with 3 GB of RAM and an internal storage of 32 GB.
Join Us On Telegram
ALSO READ:  Samsung Galaxy A20 Specs & Price: Has 6.4-inch Infinity-V display and 4,000 mAh battery
Advertisment

How To Shut Down Your Android Device By Sending SMS