TellForce Blog
Home OS Android Gionee Announces A1 Signature Edition in India
Twitter
Pinterest
Linkedin
ReddIt
WhatsApp
Tumblr
Email
Print
Telegram
Advertisement
Join Us On Telegram
Gionee has announced another version of A1 named the A1 Signature Edition. It is a limited version which comes with a signature belonging to the Indian Cricket team captain, Virat Kohli, stamped on its back. 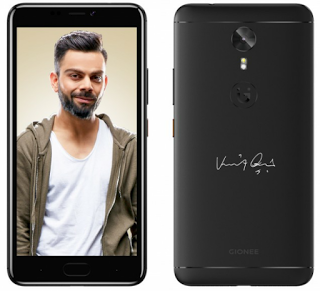 The smartphone can be purchased exclusively via Amazon Indian and as stated earlier in the post, it is available in limited quantities. starting June 27, 12PM. Pre-orders for this beautiful piece of smartphone begins today, June 20, but would be available for purchase from June 27, 2017.
Interest person who pre-order will also get Sennheiser headphones, up to INR 1280 Amazon Pay balance, further INR 2000 off on exchange, and 45GB Vodafone 4G data for five months.
The Gionee Ai Signature looks identical to the original A1 launched earlier in 2017. The available specs for the phone are as below:
OS: Android 7.0 Nougat.

WhatsApp rolls out “PINNED CHATS” feature to all Android users

How To Hide All WhatsApp Photos and Videos From Your Phone’s...