Gboard likely to get an incognito mode in Android 8.0

By Andre Falana On Jun 12, 2017
Share
Join Us On Telegram
What is Incognito mode? 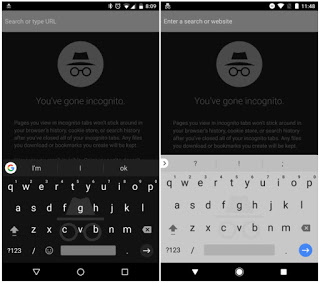 It is another word used instead of Privacy mode. Incognito mode is a setting that does not allow Internet history to be stored on your browser.
Google has extended its internet browser (Chrome) incognito mode to its Gboard. This simply means that you can enjoy more privacy by preventing your keyboard from keeping whatever you are typing in memory.
This update is only available for Android O (8.0) users, though in beta mode — Developer Preview 3 (DP3), which was unveiled last week.
Related Posts

As expected, comes with a dark background as against the normal fedora plus glasses graphic. incognito mode in Gboard prevents the Google’s keyboard from learning from your inputs and also blocks suggested words from being accumulated in word data base.
For now, enabling and disabling incognito mode on Gboard is available in settings and can only be activated only when you are using the current stable version (v. 59) or the Developer version of Google Chrome in incognito mode. Only Android O DP3 users can enjoy this for now. However, if you wish to test it, enroll in Google’s Android Beta program to have access to it. And if not, you’ll have to wait for the final version to be released.
Activation of incognito mode from any part of the Gboard would make it better and neat.
Going by Google’s previous ways of making things happening, this latest feature may likely find its way to older versions of Android.
Source
AndroidGboard
Share