By Andre Falana On Jun 14, 2017
Share
Join Us On Telegram
The Samsung Galaxy S8 and S8+ are the present best smartphones
one can get now, as they are far ahead of all their rival, according to a publication
from Consumer Reports. 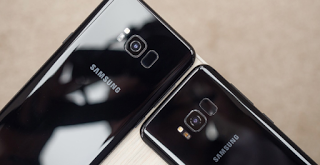 Talking about the same nearly bezel-less, top hand machines,
it has been confirmed that the latest from one of the biggest tech company is
more tough than expected, as the S8 is perhaps better than the G6 in the recent
drop test.
In spite of admiration showered on the new Samsung
smartphones, Consumer Reports also records that it found the fingerprint sensor’s
placement on the two devices awkward. According to the report, testers often
found themselves searching for the location of the sensor, smudging the camera
lens during the process.
The once best smartphone on the CR list, Galaxy S7 edge
found itself at the third position while the Galaxy S8+ leads the list. The S8
comes next to S8+, while the G6 and the iPhone 7 Plus sits at the fourth and
fifth places, respectively.
Source
galaxy s8
Share