By Andre Falana On Jun 27, 2017
Share
Join Us On Telegram
Bitcoin has lost close to 10% since Ethereum’s flash crash
on Wednesday 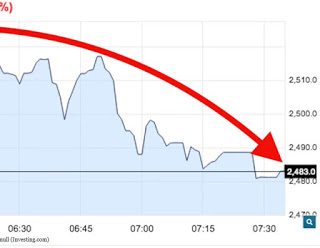 The action seems to be a continuation of the selling that
developed on Wednesday, when rival Ethereum flash-crashed from $296 to 10 cents
before recovering its losses.

Bitcoin is down about 13.6% since Wednesday’s opening print.
The recent weakness in bitcoin follows a run-up of more than
200% to start the year. Bitcoin’s 2017 gains have been propelled by heavy
buying from China and Japan.
Recent strength has come on the heels of China’s three
biggest exchanges resuming withdrawals for the first time since February, and
Japan naming bitcoin a legal payment method in early April.
Related Posts

Additionally,
Russia’s largest online retailer began accepting bitcoin, even though Russia
has said it wouldn’t consider the use of the cryptocurrency until 2018.
But the gains have created some skepticism as of late. The
billionaire Mark Cuban called bitcoin a “bubble” as the
cryptocurrency hit its then-all-time high on June 6.
“I think it’s in a bubble. I just don’t know when or
how much it corrects,” Cuban tweeted. “When everyone is bragging
about how easy they are making $=bubble.”
About a week later, Goldman Sachs’ head of technical
strategy, Sheba Jafari, said bitcoin was looking “heavy” and could
drop as low as $1,915 before seeing a rally. It put in a low of $2,076 before
rallying to almost $2,800.

There remains one big unknown. In March, the US Securities
and Exchange Commission rejected two bitcoin exchange-traded funds. It has
since taken public comment on its decision about an ETF proposed by the
Winklevoss twins, but it has not made an additional ruling.

Google fined €2.42 billion by the European Union for abuse of power