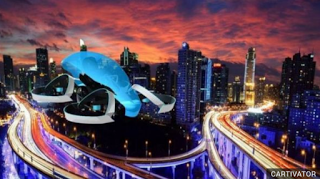 One of the most popular Japanese carmaker, Toyota has announced plans in manufacturing flying cars after declaring its support to a set of engineers who are in the process of making it real, though they are at the development stage.
The group of engineers that operates outside the Toyota city in Central Japan, also called the Cartivator group will get about 40 million yen (£274, 000) to make the project flow.
According to the Nikkei Asian Review, Toyota and its group companies have come together in principle to back the project.
The flying vehicle called Skydrive car uses the drone technology with four rotors and three wheels and has so far received payment for the development via crowdfunding.
Related Posts

Reports says, there are plans by Uber to test the on-demand flying cars network by 2020. It measures 9.5ft (2.9m) by 4.3ft (1.3m), Skydrive is said to be the smallest car in the world.
It is expected to have a top flight speed of 100km/h (62mph), while flying just 10m above the ground.
It appears science fiction is gradually turning to reality as some firms Japan, Germany, Netherlands, China and United States are sleeplessly working on the technology.
The developer of the Skydrive car which consist of a team of 30 volunteers plans to uses its prototype to light the Olympic flame in Tokyo 2020.
SOURCE: BBC
AutomobileToyotaUS
Share

Moto C Plus Specifications and Price