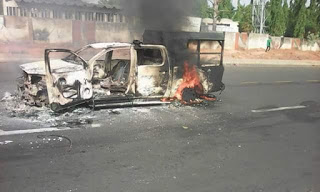 On Thursday, May 4, 2017, a patrol van owned by the Nigeria Customs Service (NCS) was burnt down by some youths allegedly sponsored by car dealers in Kaduna State.

Reports gathered said that the dealers tried to prevent a team of customs agents from impounding some vehicles from a car mart.
Related Posts

The mob allegedly attacked one of the customs officials who was driver attached to the Federal Operations Unit of the agency following an attempt to escape and also set his van ablaze before the securoty agents could arrive.
According the the spokesperson of the Nigerian Customs Service, who conversed with Channels TV, said that the owner of the car shop has already been arrested while investigations into the issue has commenced in order to apprehend the culprits. 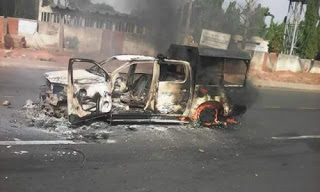 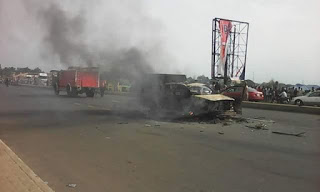