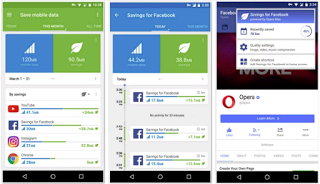 One of the most powerful data savings and management app for devices on Android OS, Opera Max, has received a major update, impacting positively on its physical appearance and background operations.
The major addition to the Android data management tool is the new design, optimized to make the powerful app more user friendly than before. A step-by-step tutorial was included by the developers that pops up when the app is opened for the first time.
The tutorial supplies useful tips in cards-like format, which are contextual to your usage.
Also, the new technology shows mobile and Wi-Fi data usage for each apps. Another interesting aspect is that, the latest design also should provide its users with personalized guide on how they can minimize data wastage.
Security part of the app was not left out in the new design as some enhancements on the security section have been included as well, so data management app, Opera Max will now be reporting any external threats encountered while providing data encryption during connection to a public Wi-Fi.
One major backgroud improvement and latest addition in the update is the inclusion of data savings for Facebook, which consumes your data like crazy. Opera Max users should now be able enjoys all the features on Facebook because they will saving up to 50% of their data plan with it.
ALSO READ:  Samsung Galaxy A50 Specifications, Availability and Price
Advertisment