By Andre Falana On May 20, 2017
Share
Join Us On Telegram
Sometimes, I wonder why a great brand like samsung refused to launch a dual camera smartphone, due to is numerous excellent records in texhnology innovations. Even mobile brands with less coverage in terms of sales and tech innovations are rolling out dual shutter phones.
ALSO READ: Samsung Galaxy C10 to the first Samsung handset to feature dual snapper.
Recall that Samsung Galaxy Note 8 was before now tipped to be the first Samsung handset to come out with a dual-shutter setup, but speculations failed us as it was not so.
Related Posts

But the South Korean tech giant appears to have been observing what others have been doing from a corner as the Samsung Galaxy C10 smartphone may come from behind to teach others on how a dual-camera phone should look like. 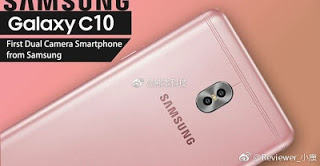 Latest leaked images of Samsung Galaxy C10 suggests that the device would not feature dual camera setup but would be the first smartphone to have configuration setup for the cameras. Great indeed but why coming late.
Leaks also reveals that the device will have dual-LED flash, power by Snapdragon 660 chipset.
ALSO READ: Samsung Galaxy S8 hits 5 millions units sales globally in less than 30 days
Of course, speculations cannot be 100% correct but could be 90% dependable. The phone specs is yet to be seen by anybody but be rest assured that Tellforceblog will update you on Galaxy C10 when finally released.
AndroidDual CameraGalaxy C10
Share