What we only hear is president said this, where is the president? – Fayose 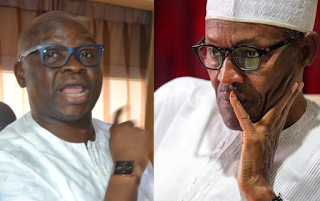 This statement was released by his governor’s Special Assistant on Public Communications and New Media, Lere Olayinka, in Ado-Ekiti. He noted it was becoming glaring that a group of cabal has taken over the powers of the President.
The governor said; “I saw the Secretary to the Government of the Federation (SGF), Mr Babachir Lawal on television responding to his suspension and what came to my mind was that there could actually be many presidents operating in the Buhari’s presidency.

“Perhaps, it is for this reason of possible existence of governments within the government of Buhari that confusion pervades the polity, with the President himself writing letter to the Senate to clear someone of wrongdoing and the same person being suspended three months after on the basis of the same allegation.

“It is also for this reason that the President nominated Ibrahim Magu to the Senate for confirmation as EFCC Chairman and the DSS, an agency under the Presidency wrote the Senate not to confirm him.

“Most importantly, the President did not attend the FEC meeting last week and the meeting did not hold this week under the flimsy excuse that Easter Break stalled it. How could Easter Break that ended on Monday be responsible for the inability to hold FEC meeting on Wednesday? Definitely, there is more to this than meets the eye.

“It has therefore become necessary that Nigerians hear the voice of their President and see him physically, not through surrogates or the cabal operating behind the scene.”

Governor Fayose went further to described a President as the face and image of a country, encourage President Buhari to hold regular media chat in which Nigerians can ask questions what ever bothers them and proffer suggestions on how to grow the country.
“Since his first and only media chat was held in December 2015, Nigerians have not had opportunity of seeing their President address them directly and this is not the best approach to governance in democracy,”  he said.
Ayo FayoseFayoseNewspresidencyPresident Buhari
Share