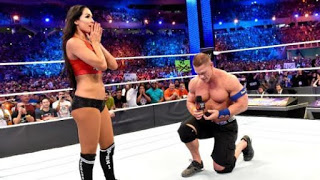 “This is what you wanted over a year ago. You broke your
neck and did everything you could to come back because you wanted a
WrestleMania moment. I’m so very proud of you.
“Right before your surgery, there would be a time when you
would be a little loopy and I could ask you anything I wanted. If you gave me
an honest answer, you wouldn’t remember what you said. After a year and half,
you asked me all the time.
“I promised I would tell you when the time is right. The
time is right.
“You were kinda glassy, in and out. At the last moment, I
said, ‘Can you hear me?’ You said, ‘Yes.’ I said, ‘I only have one question.’
You said, ‘What is it?’
“Do you know one day I’m going to marry you? And you said,
‘Yes.’
“I just need you to say yes one more time.
Cena then reached into his pocket and pulled out a ring box
and got on bended knee.
“I have been waiting so long to ask you this, Will you marry me?”
Bella the nodded and the two love birds kissed and embraced.
This would be Cena’s second marriage, after his divorce from
Elizabeth Huberdeau, his first wife, in 2012.
ALSO READ:  New Telegram Update Brings Animated Stickers
Advertisment

Jins Frontswitch: Glasses made by robot to protect your eyes in...