By Andre Falana On Apr 7, 2017
Share
Join Us On Telegram
*US launched Fifty-nine Tomahawk cruise missiles at Syria base.
*The strike came following suspected chemical attack in
Idlib province and after Pentagon stated that Syria had violated its
obligations under the chemical weapons agreement
*Not less than 86 people, including 27 children, were
reportedly killed after the suspected poison gas attack on its citizens in town
of Khan Sheikhoun area of Idlib province 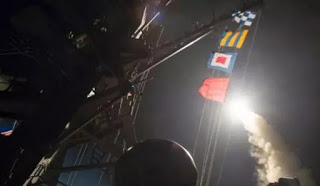 In revenge for a chemical weapons attack that slew some
civilians, the United States has pounce on the Syria government with almost
five dozens of cruise missile strikes at a government-controlled airbase.

Al-Jazeera reported that the Pentagon noted that 59 Tomahawk
missiles hit at Shayrat airfield in Homs province at about 3:45am on Friday
morning, April, 7, 2017, from where it was believed that the Syrian jets that released
the chemicals on a town control by the rebel, in Idlib province had taken off. 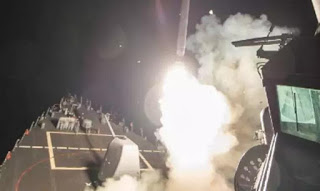 The Syrian state TV also described a US missile attack on a
number of military targets, as an ‘act of aggression.’
An official said the strikes was launched from two warships
in the Mediterranean Sea, targeting the base’s airstrips, control tower,
hangars and ammunition areas.
Related Posts

It was the first direct military action the US has taken
against Syrian President Bashar al-Assad’s forces in the six-year war.
Meanwhile, the Syria’s opposition National Coalition has welcomed
the US strike, said it will end an age of “impunity” and this should
be just the start. 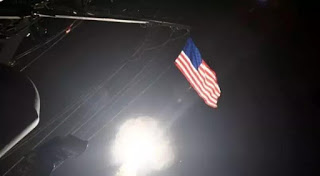 The US military said early signs were that the missiles had
severely destroyed Syrian jets and support infrastructure and equipment at the airstrip.
It was gathered that not less than 86 persons, including 27
children, were murdered after a suspected poison gas attack on the town of Khan
Sheikhoun, in Idlib province on Tuesday, April 4, 2017, according to the report
from a UK-based Syrian Observatory for Human Rights.
The attack drew general international condemnation and
public uprising, provoking the United Nations to pledge it would probe it as a war
crime incident.
The Syrian administration refuted the accusation and claimed
unawareness in carrying out the raid. Russia, who is a main military ally of
the Assad administration, has accused the opposition, saying a government bombed
a building where rebels were manufacturing chemical weapons. However, the
rebels deny this claim.
Speaking on the strike, Trump said: “There can be no dispute that Syria used banned chemical weapons,
violated its obligations under the chemical weapons convention and ignored the
urging of the UN Security Council.”