The Totteham Hotspurs’ under-23 team coach, Ugo Ehiogu collapsed at the club’s training ground today, April 20, 2017 after suffering heart attack.
The 44-year-old ex-England defender was immediately treated by the football club’s medical team before being transferred to hospital by ambulance.
Related Posts

The management of Tottenham FC have confirmed the news in a press statement through its twitter handle. It read thus: 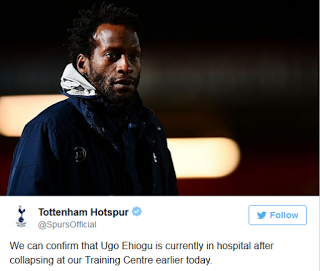 “We can confirm that Ugo Ehiogu is currently in hospital after collapsing at our Training Centre earlier today.Our Under-23’s coach received immediate treatment on site from our medical staff before being transferred to hospital by ambulance.

“Everyone at the Club sends their best wishes to Ugo and his family. We shall continue to provide updates when we have further information.”

Ehiogu won the League cup twice with Aston Villa in 1994 and 1996. He played for with England’s first team, Aston Villa, Leeds United, Middlesbrough, West Brow and some other clubs.
footballNewsSoccerSportTotteham Hotspurs FC
Share

What we only hear is president said this, where is the president? – Fayose