By Andre Falana On Apr 20, 2017
Share
Join Us On Telegram
Recall that Yesterday, April 19, 2017, the Secretary to the Government of the Federation (SGF) Engr. Babachir Lawal and the Director-General of the National Intelligence agency (NIA), Ayodele Oke were suspended by President Muhammadu Buhari via a statement released by the presidency aide, Femi Adesina.
ALSO READ: Video: Who is Presidency? – Suspended SGF Babachir Lawal
The president had also directed that an investigation to commence into the accusation of violations of law and due process made against the Secretary to the Government of the Federation (SGF), in the award of contracts under the Presidential Initiative on the North East (PINE) and that of NIA was linked to the cash saga discovered by EFCC at the residential building, Osborne Tower, in Ikoyi, Lagos.
ALSO READ: Suspension of SGF and NIA’s DG is a plot to cover up owners of the stolen funds – Fayose
Now, the once embattled senator on certificate saga, Senator Dino Melaye, who is representing Kogi west (APC), has mocked the SGF Babachir Lawal via a tweet on his twitter handle by writing a written version of his hit single “Aje kun iya ni o je”.
Related Posts

See below the tweet and some reactions from Nigerians; 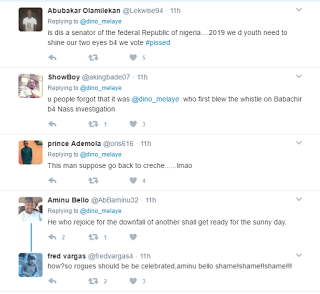 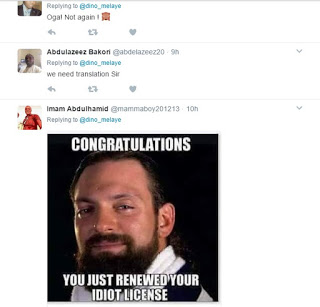 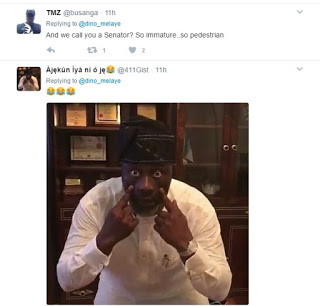