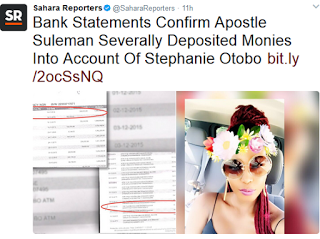 The marriage scandal between Apostle Johnson Suleman and Stephanie Otobo appears to be millions of miles away from the word “end”.

Below is the press release of the online media putlet:

“SaharaReporters has obtained new evidence that Apostle Johnson Suleman, the leader of Omega Fire Ministries Worldwide, made several monetary deposits into the Nigerian account of Stephanie Otobo, the Canada-based Nigerian musician who was arrested by the police in Lagos in cooperation with the pastor.
A statement of bank account in the possession of SaharaReporters showed that in the period between June 1st and December 31, 2015, Apostle Suleman made direct deposits totaling at least N2million into Ms. Otobo’s account as their romantic relationship blossomed.
The first deposit of N900,000 was deposited on July 22, 2015, followed by a smaller deposit of N200,000k on September 2, 2016. A week later on September 14, while she was visiting Nigeria, Mr. Suleman deposited N1million into her account.
In November 2015, Apostle Suleman appeared to have changed the manner of depositing funds into the account, turning to using other people. On November 4, one Adewunmi TO made a web-based deposit into the account. Towards the end of 2015, another person, Gbenga Adegbadebo acting on Apostle Suleman’s behalf, made three deposits: N340,000 on November 10; N238,000 on November 24; and N170,000 on December 10.
Ms. Otobo also alleges Mr. Adegbadebo, a Nigerian based in Canada was a conduit through which Suleman send hard currencies to her in Canada as Mr. Adegbadebo runs an unorthodox “money remittance company ” between Nigeria and Canada.” 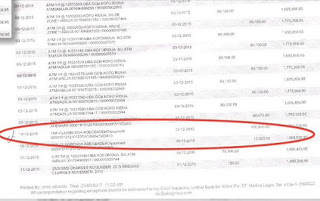 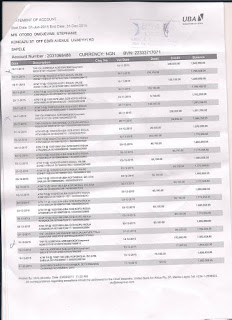 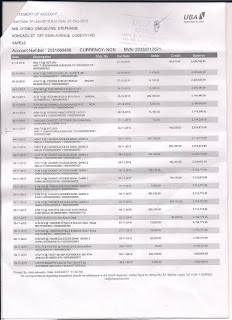 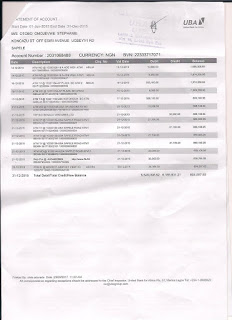 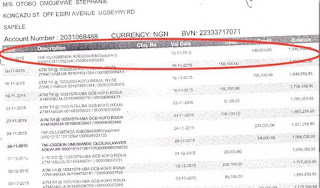