TellForce Blog
Home News Photo: Festus Keyamo comes after Yakubu Dogara over his public show of...
Twitter
Pinterest
Linkedin
ReddIt
WhatsApp
Tumblr
Email
Print
Telegram
Advertisement
The controversial Nigerian lawyer Festus Keyamo, has made
mockery of Yakubu Dogara’s public show of his ₦300,000-per-month payslip by
tweeting the below comment. He is of the opinion that the house of reps members
are performing a comedy show for Nigerians to watch.
Keyamo wrote the below on his twitter handle: 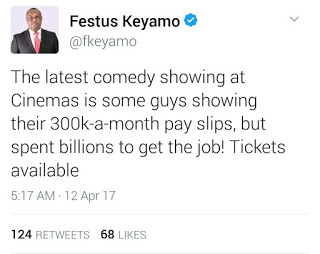 “The latest comedy showing at cinemas is some guys showing their
300k-a-month salary pay slips, but spent billions to get the job! Tickets
available.”
Recall that the Speaker of the House of Representatives,Yakubu Dogara, had on Tuesday, April 11, 2017, shared photos of his payslipfrom October 2016 to March 2017.
ALSO READ:  Dogara’s
payslips shows that I earn more than him, I will publish mine too – Honorable
Jibrin
Dogara revealed this after Kaduna state governor, Nasir
El-Rufai, dared the members of the National Assembly to share the reports of
their budget as proof that they were undeniably in support of the anti-graft war
led by the current government.
In reaction to thisFestus Keyamo, however of the opinion
that they are acting out a comedy for Nigerians to watch.
Join Us On Telegram
ALSO READ:  Graphic Photos: 16-Year-Old Boy Shot Dead By Trigger Happy Policeman In Imo State.
Advertisment

Facebook Now Alerts You Before An article That’s More Than Three...