Ooni of Ife distance self from statement credited to the Palace, reiterates respect for Oba of Lagos 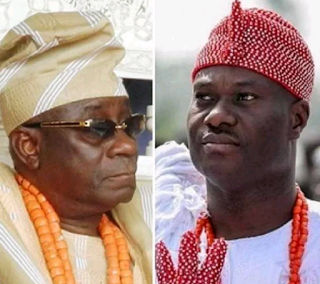 Recall the alleged brawl between the Ooni of Ife and Oba of Lagos reported by the media.

The Ooni of Ife has released a statement to distanced itself from any beef between his office and that of Oba of Lagos, insisting he will continue to accord the respect the Lagos royalty deserves.

“Ooni of Ife, His Imperial Majesty, Ooni Adeyeye Enitan Ogunwusi (Ojaja 11) on Friday disowned a remark credited to one Tunde Awoyemi who claimed to be the palace Director of tourism that the palace of Ooni would invoke the wrath of ancestors on Oba of Lagos, Oba Rilwan Akiolu if he fails to tender apology for snubbing Arole of Oduduwa at a public function recently.”

Ooni Ogunwusi maintained he would continue to hold Oba of Lagos in high esteem and will continue to give him the accord respect, not only because he is one of the foremost traditional rulers, but as an elderly Oba.

In a statement issued by Oba Ogunwusi’s director of media and public affairs, Comrade Moses Olafare,

“the palace of Ooni is using this medium to dissociate Ooni of Ife from the statement credited to Mr Tunde Awoyemi and we have said it repeatedly that we have no official reaction to the issue of Oba Akiolu.

“Kabiyesi Ogunwusi is committed to his peace and unity agenda, which he has embarked on since he ascended the throne of his forefathers. We refrain from reacting officially, with a view to avoiding fanning any ember of discord as Oba Akiolu remains​ respected monarch and the Ooni had established a very robust and healthy relationship with him before his installation as Ooni of Ife.

“While Ooni would continue to sustain the relationship with Oba Akiolu, we want to state categorically that the remark credited to Tunde Awoyemi was not authorised by Ooni and should be disregarded by all Nigerians both at home and in diaspora.

Chinese Government bans use of some Islamic Names