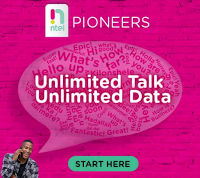 It’s just a year ago that it was commercially launched in Nigeria, a promising 4G LTE operator that smartphone users wishes to do business with. Unfortunately, they have failed to meet up with most people’s expectation as initially hyped.

Last year, Ntel announced tariffs for its Smartphone Unlimited data plans and people like me presumed that it’s because they are just starting, but now I don’t even understand them again. Guess I am now confuse.
Ntel has again modified their unlimited data tariffs, is it downward or upward review: Find below modified and new unlimited data tariffs listed:
Related Posts

Smartphone Unilimited Lite: upward review from N1,000 to N1,500 weekly. 2-day validity
Ntel had introduced the these unlimited plans in the year 2016 in form of promo, three month promo to pull more customers but later kept the promo running for more the planned three month.
Knowing well that Ntel unlimited data plans are not capped, there is what they called a daily usage threshold, that is, at a point, your connection get throttled.
However, the fair usage policy did not categorically state what their threshold is. The original fair usage policy actually stated that during peak periods each day, any customer who has reached a total volume of 3 GB will be slowed down and penned down to 512bps.
Ntel
Share