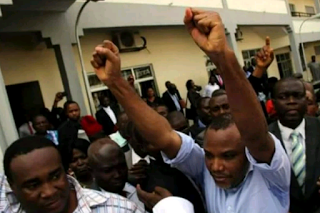 After meeting those terrifying bail conditions, the leader of the Indigenous People of Biafra (IPOB, Mazi Nnamdi Kanu has finally left Kuje Prison in Abuja, around 5pm today, April 28, 2017.
Kanu was driven home by a former Minister of Aviation, Osita Chidoka.
Related Posts

Mazi Nnamdi Kanu was arrested and detained two years ago, 2015 and charged treason and has since been in prison until around 5pm, on Friday evening, April 28, 2017.
On Tuesday, April 26, 2017, Justice Nyako of Federal High Court, Abuja granted Nnamdi Kanu bail. Although, the bail conditions were condemned by the pro-Biafra group and their supporters, which includes his inability to participate in any rallies or found in a crowd of more than 10 people while he is on bail.
Recall that the pro-Biafra group, IPOB, condemned the bail and said the bail was written by the president and read by Justice Nyako.
CourtJudiciaryNewsNigerian PrisonNnamdi KanuTreason
Share