TellForce Blog
Home News Manchester United mourns 30 football fans who died in Calabar
Twitter
Pinterest
Linkedin
ReddIt
WhatsApp
Tumblr
Email
Print
Telegram
Advertisement
Manchester United Football Club has took to its Twitter handle to pay tribute to the family of the thirty football fans who got electrocuted while watching one of UEFA Europa League quarter-final game,  Manchester United versus Anderlecht yesterday, April 20, 2017.
Below is the statement issued via its Twitter page;
“Our thoughts go out to the United fans, their friends and families affected by the tragedy in Calabar, Nigeria, yesterday.” 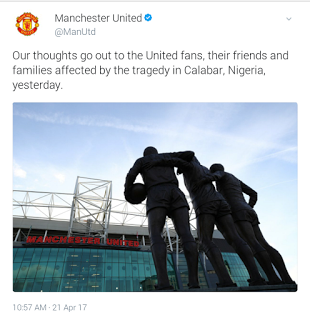 WhatsApp for Android finally get support for Fingerprint Lock