By Andre Falana On Apr 18, 2017
Share
Join Us On Telegram
The Windows 10 Creators Update has since been rolling out to PCs but we have been wondering when that of mobile will be launched. 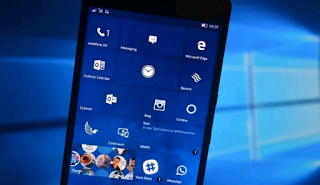 Now, Microsoft has officially announced that it would start rolling out its new OS by Next week. The new version of Microsoft’s operating system’s focus is creativity.
The new OS is actually majorly targets the PC users, but there are some new features which wiould also be available to mobile users.
If you own a device that works on Windows 10, guess this could be another fresh update for you, especially if your devices is listed below.
Find below the official list devices that will get the Windows 10 Mobile Creators update:

Don’t feel disappointed if yours is not listed above because Microsoft says, if yours is not among you can get the update via insider program.
However, remember, you are indirect told that if you experience issue during the update, you fight your battle yourself. No support for your device.
See the Microsoft official statement on the update below:
“Devices not on this list will not officially receive the Windows 10 Creators Update nor will they receive any future builds from our Development Branch that we release as part of the Windows Insider Program. However, Windows Insiders who have devices not on this list can still keep these devices on the Windows 10 Creators Update at their own risk knowing that it’s unsupported.“
Below are some major benefits of upgrading your device to Windows 10 Mobile Creator:

This mobile update we are talking about has been scheduled to start rolling out by April 25.
Share

My haters are my advertiser – T.B Joshua