I am tired of building mosques daily, every girl child should be educated – Emir Sanusi 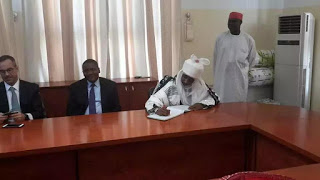 The traditional ruler of Kano, Emir Muhammadu Sanusi II of
Kano state has brought back some memories about some incidents those days as
the governor of the Central Bank of Nigeria, CBN and the criticism he suffered
from some Nigerians for introducing an Islamic bank to the country.

The Jaiz Bank was announced to Nigeria under Sanusi administration
as Governor of CBN and at that period, some Nigerians insisted that it was a
plan to islamise the country.
The Emir of Kano also stated he was not interested in
building mosques and admonished other Muslims to pay more attention on
educating children in the north rather than building worship centres.
He recalled that the management of Jaiz Bank came and told
him that they had only N1 billion to invest while the rule was that to open a
bank, you must have a capital of N5 billion.
He said he had to contact one of the Africa wealthiest men who
provided the rest, which was N4 billion.
To those with the belief that was a strategy to islamise the
country, he said that the present CBN governor Godwin Emefiele, is now at the leader
of the bank’s management.
In a note he posted on his social media page, the emir wrote:
“When Jaiz bank came up with the idea of
getting a license for the operation of the bank, they proposed the funding of
the bank’s capital with interest and I said no, you can’t fund a non-interest
bank with interest.

“The required amount to
be issued license was N5 billion at that time and they had only N1 billion.
Related Posts

“I took my phone and
called one of the richest men in Africa who is a Nigerian and a Muslim. I told
him that N5 billion is needed for an Islamic bank to start operation and the
founders have N1 billion, and he instantly agreed and issued a cheque of 4
billion. That is how the license was issued.

“Some Nigerians
thought the introduction of Islamic banking in the country was a move to
Islamize Nigeria. No at all, everything that is normal in the world is not
normal in Nigeria. There is Islamic banking in London, India and in South
Africa but the citizens there never thought it as a way of Islamizing their
countries but it became an issue in Nigeria.

“Today, Godwin
Emefiele, governor of the Central Bank of Nigeria (CBN), is the chairman of the
governing board and head of the general assembly of the International Islamic
Liquidity Management Corporation (IILM).

“Is that an agenda of
Islamizing Nigeria? No, It was done for the promotion and guidance in financial
inclusion. That is how we are.”
Talking about the tradition of early marriage and the
problem connected with the girl child in the northern part of the country, the Emir
Sanusi urged the stakeholders to invest more on educating a girl child than
building mosques.
He said: “75% of 18-15
married women in the country today are not educated, that is why the society is
producing illiterate mothers and children. I am tired of building mosques
daily.

“We keep building
mosque while our children are not educated, our foundations and NGO’s should
give much focus and priority to girl child education, the mosques are OK
enough.

“I am currently
drafting a bill that will be sent to the state Assembly for legislation against
early marriage.

“We need to ban it,
all this issues of maternal health and Almajiri are courtesy of early marriage
as a result of lack of education for our girl children, this is bringing us
back.”
BankingEducationEmir SanusiJaiz BankNews
Share

Samsung And MasterCard To Launch Bank Cards With Fingerprint…