By Andre Falana On Apr 3, 2017
Share
Join Us On Telegram
Another era of fuel scarcity may emerge as authorities of
the Petroleum Tanker Drivers (PTD) have ordered their members to commence an
indefinite strike beginning from today April 3, 2017. 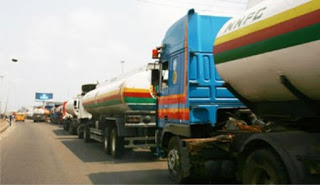 The National Chairman of PTD, Salimon Oladiti, has asked
members of the association to close down all fuel terminals and loading depots
until further notice.

In a discussion with Vanguard, the Chairman says the strike
is a symbol of protest against non-renewal of their Collective Bargaining
Agreement (CBA) which has since expire three years ago, appalling conditions of
nation’s high ways, purported harassment by security men, especially Nigeria Security
and Civil Defence Corps (NSCDC) and alleged plans by Capital Oil Plc to declare
2000 members jobless due to its unsettled issue with Petroleum Products
Marketing Company (PPMC).
Related Posts

“The strike is
definitely going ahead as planned and it will be total because all loading
depots and fuel terminals will be shut down. We have fully mobilized and
sensitized all members.”
Fuel ScarcityNewsPPMCPTDStrike
Share

Video: Proven method on how to naturally regrow Hair on Bald Head within a week