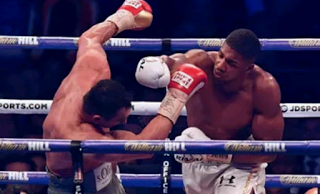 The British born boxer of Nigerian Origin, Anthony Joshua who beat Wladimir Klitschko on Saturday, April 29, 2017 has attributed his secret of success to Nigerian dishes.
Anthony Joshua has added the WBA belt to his IBF title with an 11th-round stoppage of Klitschko in a thrilling bout yesterday.
Related Posts

The British born boxer was knocked down in round six but knocked down his opponent, Klitschko, twice on the canvas in the penultimate round before the match official stepped in.
Joshua (27) did not only retain the IBF World Heavyweight Championship, but still maintains his undefeated record as a professional, with 19 victories in his bag.
The Saturday night which entered history books as one of the biggest fight nights in boxing history penned down a record post-war British boxing crowd of 90,000 at the Wembley.
Joshua, who is of Nigerian Origin, responded to some questions about his ancestral homeland, Nigeria said eating Pounded Yam, Eba and Egusi is the secret of success.
Anthony JoshuaBoxingSportWladimir Klitschko
Share

Serena Williams pregnancy gives her advantage over other when playing- Australian…

Serena Williams pregnancy gives her advantage over other…