Dogara’s payslips shows that I earn more than him, I will publish mine too – Honorable Jibrin

By Andre Falana On Apr 12, 2017
Share
Join Us On Telegram
*Jibrin has come out to counter the Speaker of the House of
Representatives, says, does it he earns more than the speaker, believes the
payslips were not authentic 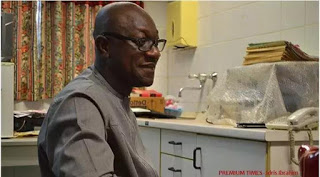 *He also said he has requested for his own payslips from the
National Assembly which he would make public to show the difference
The Suspended representative, Abdulmumin Jibrin has raised suspicions
over the genuineness of the payslips released by his boss Yakubu Dogara, who is
the current Speaker of the House of Representatives.
ALSO READ: Photos:
Speaker Dogara’s Pay Slip says he earns N300,000 per month
In series of tweets released on his Twitter handle, Jibrin
said the figures released as the speaker’s monthly pay were far below his own
monthly as a floor member of the house of reps.
See what he tweeted below: 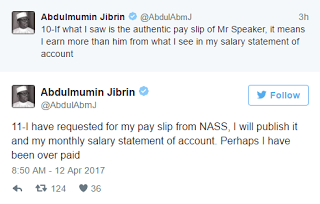 Speaking on the National Assembly budget, he said: “As
regard NASS budget, I completely agree with paragraph 9, 10 and 11 but will
raise issues on paragraph 5, 6.

“The statement failed to address the call by Nigerians and
majority of members for Mr Speaker to disclose details of our internal budget.

“Beside salaries, allowances and running cost , no member has
details of about 20 other expenditure heads captured in Namdas statement.

“I am aware majority of members feel terribly embarrassed and are
presently insisting on having access to the internal budget of the House.

“The details of INEC budget does not just “exist else
where”.

“Mr Speaker, you know that NILS HQ is not completely funded from
NASS allocation but part funded by FG under service wide vote.

“If Mr Speaker is saying ‘ budget disclosure’ commences
2017,Nigerians will never see details of how a trillion was spent in last 10
years?

“It’s no favour to Nigerians disclosing details of budget. In
fact, it is a criminal offense to refuse even members copy of their budget.

“I have so much comments to make on 2017 budget which I will
release before the budget is transmitted to Mr President, God grace.”
Recall that Tellforceblog earlier reported that the Speaker
released his payslip to the public, in order to encourage the spirit of
transparency among public officers.
ALSO READ: Photos:
Speaker Dogara’s Pay Slip says he earns N300,000 per month
The documents released by Dogara showed the breakdown of his
salary for October, November, December 2016 and January, February, March 2017.
Abdulmumin JibrinDogaraHouse of AssemblyHouse of RepsNewsPay Slip
Share

Photo: Festus Keyamo comes after Yakubu Dogara over his public show of his alleged 300k payslip