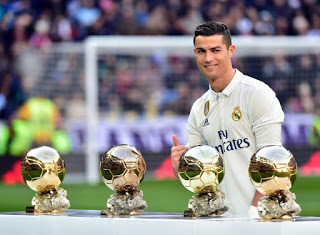 The current world best footballer, Cristiano Ronaldo has refuted a report published by a German magazine that he paid a lady who accused the footballer of rape the sum of $375K to seal her lips.
The German Newpaper, Der Spiegel claimed that the Real Madrid star allegedly raped the woman was in 2009, and but was allegedly paid a settlement sum in 2010 to prevent her from speaking out.
A letter said to have been written by the woman who is in 20s during that period became root of the accusation. However, Cristiano Ronaldo denies ever seeing anything of such.
Related Posts

Ronaldo has swore to take legal action against the Newspaper through strong worded statement released from his agent to make them pay.
The statement reads thus:
“The German newspaper Der Spiegel today publishes an extensive report on an allegation of rape alleged to have been made to Cristiano Ronaldo in 2009, ie about 8 years ago.

“It is a piece of journalistic fiction. The alleged victim refuses to be identified and corroborates the story.


“And the whole plot is based on unsigned documents and where the parties are identified by codes, in emails between lawyers who do not concern Cristiano Ronaldo and whose authenticity he does not know, and in a supposed letter that would have been sent by the putative victim, but which he never received.


“The report by Der Spiegel is false and Cristiano Ronaldo will act against this media by all means at his fingertips. The imputation of a violation is a disgusting and outrageous accusation that can not be made clear.”
Christiano RonaldoCR7Cristiano RonaldofootballrapeSport
Share