By Andre Falana On Apr 4, 2017
Share
Join Us On Telegram
Abubakar Shekau’s section
of Boko Haram has released another video clip against President Muhammadu
Buhari and other government officers.

The short film also revealed some villagers being whipped
for various offences.

Tellforceblog understands that the transgressions for which
they were being flogged were based on custody of hard substance, alcohol in the
settlements most likely under their governance in Sambisa and environs, northeastern
Nigeria. 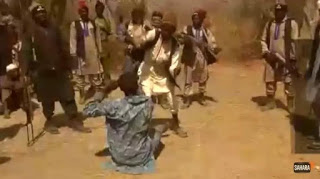 Also read: Boko
Haram Releases New VIDEO
The video only showed a preacher talking wide about the Nigerian
government. He was fenced by gunmen and some people who were supposed to be
villagers held hostage. 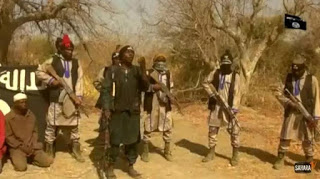 SaharaReporters reported that the new video clip was
released solely to a popular freelance reporter.
Also read: Video: Boko
Haram releases new video, gruesomely killed alleged government spies
Recall that this will be the third video since March 13,
2017, when the extremist group released a video which was produced in Hausa and
Arabic, and which comprised series of footage showing government officials,
Islamic priests and world leaders plus a footage of President Muhammad Buhari,
the current and former president of the US, Donald Trump, Barack Obama and
several European leaders.
The second video
was released in last week and showed Boko Haram’s hostilities in Cameroon.
Also read: Boko
Haram Releases New VIDEO
Watch the Video below:
Boko HaraCrimeCrime. TerroristsNewsTerrorismTerrorist
Share

15 people killed as herdsmen clash with farmers in Benue state