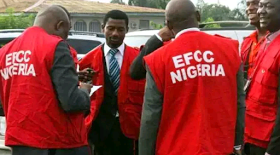 Series of events on recovery of different set of huge amount of money have now been recorded by the Economic and Financial Crime Commission (EFCC) and some might secretly still be in process. Kudos to them for the hardwork, however, so many theories about the discoveries have started compressing our brains because some informations are still missing.

Recall that on Tuesday, March 14, 2017, the sum of N49 million was been intercepted by the operatives of the EFCC before the passing the process of moving out of country through the Kaduna airport. My question is, how would such huge amount of money be stashed in big bags escape the airport’s CCTV and human securities? It sounds funny.
Till date we are still waiting for the details of the owners.
ALSO READ: N49 million cash intercepted by EFCC at Kaduna Airport
Another was after getting a tip-off got from a whist blower, the operatives of the EFCC instantly rushed down to the well-known Balogun market in Lagos to intercept a huge amount of cash in different currencies on April 11, 2017. The cash in total was about N250 million money, which includes €547,730, £21,090 and ₦5,648,500.
It was reported that the source who gave the tip-off to the anti-graft agency told them that the location of the N250 million money was changed to somewhere inside the market, so as to convert it to foreign currencies by anonymous people.
ALSO READ: Photos: EFCC found another N250m cash in Lagos Balogun market
Another question is, does it mean, the Bureau De exchange agents who were to convert the currencies does not know the identity of the owner or have a link to the owner. Atleast, they must have contacted somebody before collecting the job of conversion to the desired currency?
Will you convert a currency without being given the information of the desired currency?
Remember Tellforceblog reported that the EFCC, Lagos chapter, had on April 8, 2017, uncovered yet another large sum of money in the tune of N448,850,000 (Four hundred and forty eight million, eight hundred and fifty thousand naira) suspected to have been laundered and kept in a shop at one LEGICO Shopping Plaza, located along Ahmadu Bello Way, Victoria Island of Lagos State.
The money in denomination of N500 and N1000, stashed in some bags commonly known as Ghana Must Go bags and hidden in a shop in the wait of converting it into foreign currency.
According to the information provided by a source who was the concerned whistle blower, men of the agency swooped into action by raiding the shopping complex and sought the details of the alleged owners of two shops, LS 64 and LS 67 which were found with locks and keys.
ALSO READ: Video/Photos: About N500 million discovered in a Plaza Shop by EFCC
Something get disturbing my thoughts, does it mean, the shops does not have landlord? If it has, the landlord was supposed to have the details of the tenants. How can all the neighbours claim ignorance and you will keep quiet as an investigator?
I am not saying they should be interrogated through torture (the African way). No! That would be nonsence, but do it professionally.
Now, the discovery that has open some person’s eyes, the Osborne Tower brouhaha. On April 12, 2017, the EFCC alleged that it has recovered another huge amount of money from a home.
Related Posts

ALSO READ: Video&Photo: EFCC discovers $38m, N23m and £27k hidden in an Ikoyi home
The anti-graft agency revealed that the money in different currencies, including $30 million, N23 million and £27,000 was found stashed in an Ikoyi home, in Lagos State.
This latest discovery has been generating a lot of controversies, to the extent that some bodies have started coming out to lay claims for the money.
Even a whole state, the Rivers State Governor, Nyesom Wike, came out to say the $43 million allegedly found by EFCC belongs to his state and had has given the Federal Government 7 days ultimatum of to return the money which was found in an apartment in Ikoyi, Lagos State.
Speaking to the Press at the State House in Port Harcourt on Friday, Governor Wike claimed that investigations carried out by the Rivers State Government revealed that the allegedly discovered money by EFCC was the proceed realized from the sale of gas turbines by the former Governor of Rivers State, Rotimi Amaechi.
He said: “The money in question belongs to the former Rivers State Governor, Chibuike Rotimi Amaechi. We want to confirm that the houses in Ikoyi also belong to Chibuike Rotimi Amaechi.

“If you recollect in 2015, we said that gas turbines built by Former Governor Peter Odili were sold to Sahara Energy, business partners of Chibuike Rotimi Amaechi at $319million.

“What was stashed at the Ikoyi residence was part of that fund.

“We have facts to prove that the said money belongs to the Rivers State Government. The Federal Government must return our money.“
For me, I think Rivers State is trying to make commedy out the issue.
One of the interesting part of the story is the storming out of National Intelligence Agency (NIA) to the public to lay claim on the money.
The NIA is one of Nigerian government agency tasked with overseeing foreign intelligence and counterintelligence operations. It is supposed to be a secret agency, according to the international code of conduct relating to such function of security, NIA are meant to even be more of a secret agency than even the DSS.
The role of NIA and its functions are equivalent to some foreign agency like the United Kingdom’s Secret Intelligence Service (SIS or the MI6) or that of Canadian Security Intelligence Service (CSIS) and so on.
Yet, NIA issues are not supposed to be flying on media platforms, to the level of coming out to claim some controversial elements through media. Is there no proper co-existence among all our security and intelligence agencies.
All our secuity agencies are supposed to work as one, assist each other investigations, but in Nigeria, No!
They even look for a way to kill themselves, recall the indictment of the Ag Chairman of the EFCC on corrupt practices by the Department of State Services.
MY FINAL QUESTION IS, hope the EFCC is not trying to manupulate its way in earning back its reputation?
corruptionEFCCOpinion
Share