15 people killed as herdsmen clash with farmers in Benue state

By Andre Falana On Apr 4, 2017
Share
Join Us On Telegram
Fresh resentments between herdsmen and farmers in Benue
state has resulted to the death of 15 people. 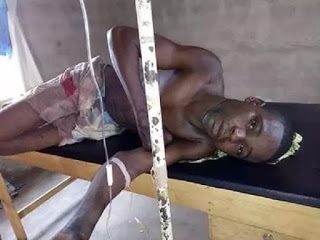 Not less than 15 persons have been allegedly slain in fresh
crisis between herdsmen and farmers in Turan communities in Kwande Local
Government, Benue State.
It was earlier reported that the state police command reported
that only two bodies had been recovered from the communities in question.
But, the renewed crisis has resulted to the desertion of
many people, while numerous houses, huts and farmlands were destroyed in the
besieged communities.
According to a resident in one of the communities affected by
crisis, the fight started early on Sunday morning when suspected herdsmen with
weapons invaded Ikyoawen, where four persons were supposedly killed and houses
razed.
The resident said: “After
that attack, they moved into Nzaav and Alaba in Yaav council ward, where over
11 persons were hacked to death and several houses burnt down by the herdsmen.
Related Posts

“Though the affected
communities have been deserted, we are still searching in the bushes for many
missing persons, including women and children.

“We also realised that
the attackers have occupied the sacked communities without resistance. As we
speak, several of the houses are still on fire.”
Reacting to the incident, Alhaji Garus Gololo, who is the
National Coordinator of Miyetti Allah Cattle Breeders Association (MACBAN),
said he was unaware of the presence of herdsmen in the affected communities.
Gololo said: “if
anything is happening there, it would certainly be the handiwork of criminal
elements, who are bent on frustrating the efforts of the government to ensure
peaceful co-existence in the state.”
The Police Public Relations Officer, Moses Yamu, affirmed
the occurrence of the attack and noted that two demises were recorded.

“We heard that Alaba and Mande Ordue
communities in Yaav council ward of Kwande council were under attack by
suspected herdsmen.

“Mobile policemen have
been deployed to the area as two persons, including 65-year-old Keemo Anumen
and 46-year-old Tervershima Dado, have so far been confirmed dead and their corpses
deposited at the NKST morgue in Jato Aka.” Yamu said:
BenueCrimeCrisisFarmersFulani HerdsmenNews
Share