Xenophobic attacks: Nigeria is not afraid of retaliation – Nigerian Lawmakers to South Africa

By Andre Falana On Mar 7, 2017
Share
Join Us On Telegram
On Monday, March 6, the House of Representatives has told the South African government that the recent attacks on Nigerians residing in that country should be the last on Nigerians as it (Nigeria) has the capacity to retaliate any form of treatment bestowed on its people. 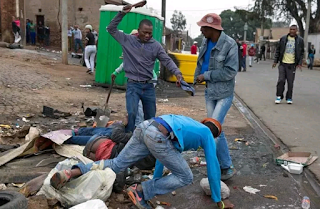 Speaking to the newsmen in Abuja, the Majority Leader of the House and who was the leader of the delegation, Femi Gbajabiamila has rubbished insinuations in some quarters that the visit was a pure waste of the resources.
Giving reason reasons behind the visitation to South Africa, the Majority Leader said, “We are hopeful that our engagement with the South African Parliament and authorities will provide lasting solutions.

“We will attempt to meet with the South African Parliament to discuss the possibility of both our countries enacting hate crime laws. This would cover crimes committed based on nationality.

“We intend to engage the SA Parliament and other authorities on areas of mutual benefit and how much both countries could lose from xenophobia and possible retaliatory actions or severing of diplomatic ties.

“This delegation will seek to strengthen the Nigerian /South African Bilateral Commission which only exists on paper for now. We hope to meet with Nigerians who reside in SA and assure them of governments intervention.

“We will advance and hopefully get a commitment on the need for payment of compensation for the victims of this last attack.”


“The House believed that it would be almost an irresponsible act or omission for any Parliament or Legislative body confronted with an issue such as this not to take proactive steps in addressing the issue.


“There is in a representative democracy such as ours such a thing as parliamentary or legislative diplomacy and not all international discussions are government to government. We would like to talk a little bit more about this to underscore the need for this trip and hopefully explain to Nigerians who are asking genuine questions on the necessity for it.


“The Nigerian Constitution which we all swore to defend, uphold and protect declares that the primary purpose of government is the security and welfare of the citizens. It does not limit this to citizens only if they reside in Nigeria but citizens wherever they may be found.


“The same constitution gives the legislative arm of government oversight functions. Again the constitution does not limit oversight to the four corners of Nigeria. Where legislators are able to access information and go on fact finding missions necessary for proper framing of laws then they can embark on external oversight, even for investigative purposes.


“The United States after which we fashioned our democracy for years has this same long standing practice of legislative diplomacy where groups of legislators visit foreign countries and engage their officials on issues ranging from terrorism to free trade to human rights issues.


“Indeed we are all aware of the congressional foreign oversight led by Representative Jason Chaffez to Benghazi/Libya on the murder of the then US Ambassador Christopher Stephens . Even more recently in defending his notorious contact with the Russian Ambassador, the Attorney General of the US who was then a senator claimed as his defence that his communication was in his capacity as a US senator which was normal.


“Again legislative diplomacy. Surely the attack on Nigerians on foreign soil must be addressed frontally using every ammunition available in governments arsenal including elected representatives. The moral and psychological uplift this would give to our citizens abroad and the comfort in the knowledge that they have not been abandoned by their representatives cannot be quantified.”

“Foreign Diplomacy and constructive engagement of foreign officials in modern day and constitutional democracy is no longer the exclusive preserve of the Executive.


“Diplomacy and engagement of foreign countries especially when it involves the security of a country’s citizen has become extensive and non traditional to the extent that some countries even use private citizens or former Presidents for engagement.


“Today Presidents address foreign Parliaments, an indication that diplomacy is best practiced beyond executive confines and has since dovetailed into legislative arena. We must remember that the debt forgiveness this country enjoyed through constructive diplomacy with our creditors during the Obasanjo regime had the House finance committee at the time play a pivotal role.”
Related Posts

Justifying the huge sum of money spent on such trip when the country is still battling with recession.
Gbajabiamila said: “Recession does not stop the parliament from going into South Africa to look at issues.


“I believe one Nigeria life is a lot more valuable than any money, you cannot quantify it, you cannot put money on a Nigerian life. And I believe it will be shirking from our responsibility. We represent people who are in South Africa, Mexico and India.”

“We have engaged with the Nigerian High Commissioner in South Africa, we had a conversation yesterday (Monday). In fact on the contrary, they are absolutely delighted over the move that we are deploring all possible ammunition to deal with this very serious problem.”

He also said the senate need not to duplicate the visit: “This is bicameral legislature, both houses are independent but for the ease of governance and diplomacy, it would have been proper or better to have one house and not two houses, this duplication of labour is absolutely unnecessary for both houses to travel.


“I believe it was an oversight on the part of the senate. If you know our history, normally when the senate has done something, most times even if it comes up on the floor of the House, if you follow our debate, we will say this matter has already been decided by the senate.


“I believe in this particular case, the senate was not aware the House has taken a resolution on this matter.”

On why the delegation needs to go to South Africa when in Nigeria alone, innocent citizens were being killed any how, such as the killing of youths in Port Harcourt, during the inauguration of the US President, Donald Trump, and government turned its deaf hear to the situation, he said that the House had always been there for the masses.
He said: “On the issue of IPOB, and issue of southern Kaduna, charity begins at home, keen observers of what happens in the national assembly will noticed that the House has not sat down idly without doing anything about these killings that happen here in Nigeria.


“Southern Kaduna for example, this matter is brought up on a regular basis and delegations were sent and where they are attacks in parts of Nigeria. I don’t believe we sat down idly and done nothing.


“Now we are doing something out of the ordinary and again we are hearing ‘why are you doing it’. Let’s look at when it succeeds we will all be the happier for it.”


“Not too long ago Nigeria fined perhaps the biggest south African company N3.5 billion – as fines there was no question of being afraid to slap such a hefty fine which many argue could cripple MTN, we did it because they broke the laws.”