By Andre Falana On Mar 13, 2017
Share
Join Us On Telegram
The social media has seriously been on outrage following a footage that shows how a cop was punching unarmed man and threatening witnesses with his firearm. 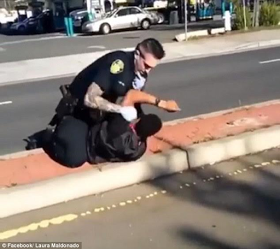 The Footage of the police officer using excessive force on a suspect and threatening witnesses who accused him of police brutality has made people to condemned the police officer, saying that he went too far.
The incident happened on Friday afternoon at a gas station in Vallejo, California when the cop responded to a 911 call that there was a man acting crazy around there and causing nuisance. 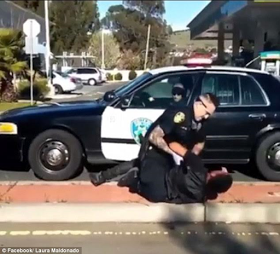 Upon arrival of the officer at the scene, he started chasing the unarmed suspect for several minutes, before the suspect eventually gave up and sat on the floor, in the middle of the road.
Related Posts

The policeman went ahead to push the unarmed man to the ground then punched him several times in a bid to arrest him, while the suspect kept shouting repeatedly “I am God, I am God”.
People around the scene could be heard screaming at the policeman, especially a voice screaming “police brutality”, prompting the cop to wave the gun at them and also shouting at the same time, “get the f*** back.”
The video had been viewed more than a million times within the first two hours it came online.
The suspect is currently in jail for resisting arrest and being under the influence while the officer in question has not been arrested.
Accoding to Lieutenant Jeff Bassett from Vallejo PD, the said officer is just like every other person, he’s innocent until otherwise proven guilty.
Watch the video below.
CrimeforeignNewspolice
Share