Video: Goals Highlights of Unbelievable Barca’s 6-1 victory over PSG at home to go through

By Andre Falana On Mar 9, 2017
Share
Join Us On Telegram
Related Posts

Barcelona simply show the world that NOTHING IS IMPOSSIBLE. 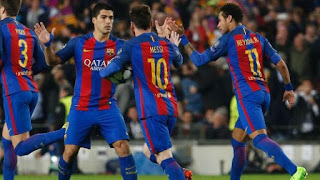 A great lesson from Barca displaying what I call magic on Wednesday night, March 8, 2017, as they made history in the UEFA champions league by turning around PSG’s 4-0 thrashing in the first leg to 6-1 victory at camp Nou.

PSG seems to have gotten it wrong from the beginning of the match for setting up a defensive squad, resting their talisman Angel di Maria in the first half. A team can hardly survive a desperate Messi, Suarez and Neymar in combine and this fear led PSG to various defensive mistakes which gifted Barca’s its first goal through a strike from Luis Suarez in the third minute.
Then their faith Begins to soar high.. PSG scored own goal, became 2-0. 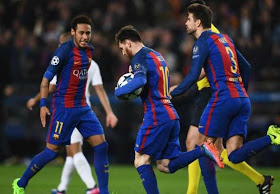 Then Messi Lionel Messi scored just after halftime (3-0) leaving Barca just a goal behind to come back.
Watch the rest below to feel the happiness from Barca end and agony from PSG end.
Barcelona FCfootballLionel MessiLuis SuarezNewsNeymarSport
Share