By Andre Falana On Mar 28, 2017
Share
Join Us On Telegram
In a troubling video that has appeared amidst rash of racially
prejudiced attacks on Africans in Greater Noida near Delhi, a man is seen seriously
brutalized with steel trash can by a large group at a mall. 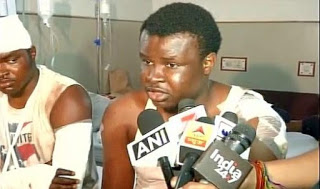 The footage, seemingly filmed by a mobile phone user at the
Ansal Plaza in Greater Noida, has been shared on Facebook by the Association of
African Students in India.
A black man is seen curled up on the floor, fighting for his
life while trying to block all repeated blows from the mob with his arms.
Related Posts

Nobody was there to help the man or stop the attack that seems
to take place in the middle of the mall’s ground level.
The video was actually taken from a point out of sight on
the first floor.
Following at least three reported events directed at African
nationals, senior police officer Dharmendra Kumar told the mass media that
security has been provided at hostels and colleges.
Several African students study in universities in Greater
Noida, a township very close to the capital.
foreignindianNewsracism
Share

PUBG Mobile Will Return To India With $100 Million Investment

PUBG Mobile Will Return To India With $100 Million…