A Muslim girl has caused serious social media outrage after being caught twerking in public in her hijab, as people hailed her. 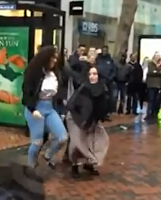 According to The Sun UK, a 17-year-old was out shopping with friends when they joined a street performer and began dancing.

The footage of her dancing went viral online, and attracted a bombardment of hateful comments. One wrote: “That’s so disrespectful is you are wearing hijab you are representing Islam respect dignity so how to act like a fool that is a big disrespect.”

The lady in question later gave an emotional interview to Muslim YouTube star, Ali Dawah. Although, her name was not revealed.

Watch video of her twerking below:

She told him at a phone interview: “To all the girls that wear hijab and wear abayah, I’m sorry for disrespecting it. I’ve learnt from my mistake. It’s gone viral and I’m just hurt, I just want everybody to leave it alone and keep everything away, I don’t want it to be how it was and I am not going to do anything like that again. I am sorry for disrespecting it and thank you to all of you that helped, it’s up to Allah to judge, at the end of the day I will be judged for it, not you guys.”

Watch the video of the social media outrage below:

UPDATE (Photos):Clash between Hausas and Yorubas in ile-Ife, Osun state