By Andre Falana On Mar 14, 2017
Share
Join Us On Telegram
Standard Organisation of Nigeria (SON) has apprehended a dealer
of cosmetics who postdates the expiry date of goods to sell to innocent
consumers. 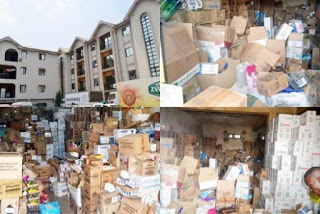 A wholesaler who imports items and also the owner of Jouf
Nigeria Limited, Kirikiri road, Apapa area in Lagos, also has two four-storey
buildings which he’s using as a warehouse for his goods, was caught selling
expired product to public.
He deals with wholesaling of assorted wines, different kinds
of deodorants, cosmetic facial wipes, body creams, oils and lotions, Pampers
and Huggies baby diapers, sanitary pads, detergents like Sunlight, Ariel and
more.
This building was filled to brim with these products, including
under the stairs. Almost all of them have expired, some of these products were said
to even have been in the stock since 2004, but instead of destroying them,
Joseph and his employees postdates the expiration date on the products and sell
them to his customers.
Related Posts

He also owns shops at Balogun market in Trade Fair Complex, where
he supplies to major stores within Trade Fair and across the country.
When interrogated by SON, Joseph claimed that he had called
on NAFDAC several times to come and destroy the products but the agency refuse
shows up in time and anytime they do, they only destroy some and leave others.
NAFDAC in turn refuted his claims, saying they are all lies
and that it wondered why he had to change the dates on the products, if he was truly
waiting for them to get destroyed.
Speaking on behalf of Osita Aboloma who is the
Director-General of SON, Bede Obayi, the Head, Inspectorate and Compliance SON,
said that the perpetrator will face the wrath of the law.
He promised that more investigations will be carried out and
will make sure the expired goods already in the market are recalled from the
retailers at the outlay of Mr. Joseph Udeh.
He was wary the effect the products would have on users,
especially children, who consumes most of the product.
CosmesticsCrimeExpired productsSON
Share