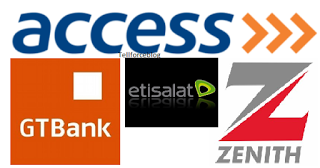 Three Nigerian banks are allegedly set to take over the
management of one of the top-4 telecommunications company in the country,
Etisalat NG, due to a debt of N541.8 billion incurred by the company.

According to reports, Etisalat had secured a loan facility estimated
to be $1.72 billion (about N541.8 billion) in 2015 from an association of some
foreign and Nigerian banks that includes Access Bank,
Guaranty Trust Bank and
Zenith Bank.
Etisalat Nigeria which started its operation in 2009, had
obtained the loan to fund a major network rehabilitation and to expand its
operational base within Nigeria.
Etisalat is using the current recession as an alibi for its failure
to pay the loan. The banks affected by the predicament have dragged the
telecommunication company before the two regulators involved, the Central Bank
of Nigeria, CBN, for banking sector and the Nigerian Communication Commission, NCC, for Telecommunication sector.
Etisalat has been admonished to request for a bankruptcy
status in order to surrender the company to the banks.
NCC was said to have approved the takeover of the company
which is to take place today.
Join Us On Telegram
ALSO READ:  Peace Corps of Nigeria sues Police and DSS over arrest, demands N2bn compensation
Advertisment