By Andre Falana On Mar 1, 2017
Share
Join Us On Telegram
Recall that Blackberry signed agreements with a Chinese
company TCL for design and distribution of Blackberry Branded smartphones
globally. It also signed with some other companies to do same but for only some
specific locations. 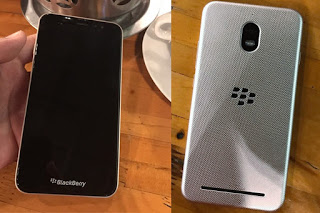 PT BB Merah Putih
was one of the companies that signed the agreement few months ago and would be permitted
to release BlackBerry branded smartphones for Indonesian.
One of the first devices from the result of these agreements
that could be unveiled in the country is a mid-range smartphone, which is rumoured
to be under the model number BBC100-1.
Leaked images of the phone have been recently reported by Crackberry,
along with a few other specifications, such as device coming with dual-SIM
support and a 3,000 mAh battery.
Related Posts

Leaked specs includes:
Dual-SIM
support
5.5-inch HD
(720p) display
3,000mAH
battery
Powered by a
1.4GHz Qualcomm Snapdragon 425 processor
4GB of RAM
32GB of
internal memory.
The BlackBerry BBC100-1 has now been certified in Indonesia
but we are waiting for the next logical step to be taken by PT BB Merah Putih
to make it official.
No information yet to confirm the availability of the
smartphone worldwide.
AndroidBBC100-1
Share

Video: Despite the fear of Buhari, there is still monumental fraud in the oil sector – Senator Dino