By Andre Falana On Mar 18, 2017
Share
Join Us On Telegram
Sometimes, you think you have seen it all, especially when
it comes to religion. Another bizarre way of healing the sick has gone viral by a so called prophet of God. 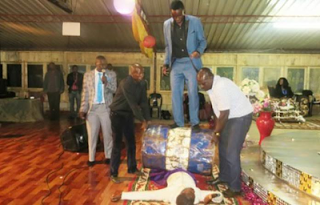 A Zimbabwean Prophet, Wiriranayi Gomani of Jubilee City
International Church, who is allegedly doing his wonders by rolling a drum over
his followers or walk on them to exorcize evil spirit from their body.

According to the self-acclaimed prophet of God, after
healing the challenged, they will passed out in order to get spiritual strength
from the angels.
Related Posts 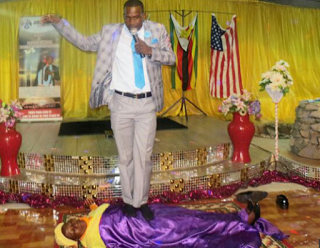 He said: “When we heal
people they will be in comatose a spirit where angels will be surrounding them
and giving them strength spiritually,’ claims the prophet.

“I do not use
juju or any spirit but it is the power of God l support that with a verse in
the bible Genesis chapter 2 verse 21 to 24 when Adam was put into a deep sleep
by God to remove a rib so as to create Eve without any pain.

“In a similar incident
in Exodus chapter 24 Moses took 40 days and 40 nights without food and he never
got hungry but was finally advised to build Ark that is comatose.”
A report by Kwayedza local media said that, many of his
church members testifies that the prophet is performing wonders in their life.
BizarreHealing the SickJubilee City International ChurchReligionRolling Drum on peopleSickWiriranayi GomaniZimbabwe
Share