Wow! Wow!! Wow!!! Robert Bobroczky, who is just 16-year-old is the tallest teen in the world and the second tallest basketball player in the world.

Robert’s father is said to be 7-feet-1-inch, while his mother is 6 feet tall. He relocated to the United States from Romania when he was 14-year-old. He lives in Austinburg, Ohio, and joins Grand River Academy, an all-boys boarding school. 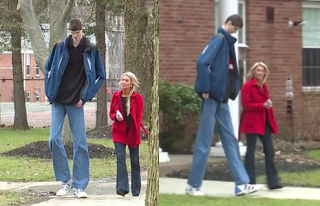 Robert Bobroczky is 1 foot taller than LeBron and taller than all the basketball player in the NBA.

Roberts hopes to play in the NBA in the future but to do that, he needs to attain more weight and balance. He is said to need add more pounds ranging from 40 pounds before becoming a professional player.

According to Fox News, Robert said:

â€œWell, the main thing Iâ€™m working on is trying to get bigger, better.”

Immediately classes are done, he heads straights to Spire Institute, an elite training center for athletes.

EXPOSED: What Magu told President muhammadu Buhari about DSS accusations against him

NBA To Show Live Basketball Games on YouTube From March 31…