Photo: Lady brutalized by Nigerian Soldier for challenging him on why he slapped her brother

By Andre Falana On Mar 15, 2017
Share
Join Us On Telegram
Yet again, in Ikorodu area of Lagos, an event of how a
soldier heartlessly beat up a young lady, after she allegedly confronted the
soldier who slapped her brother for no cause.

The name of the soldier was not given, but is reportedly
said to be attached to the 174 battalion, Nigerian Army Barrack, Odoguyan,
Ikorodu. 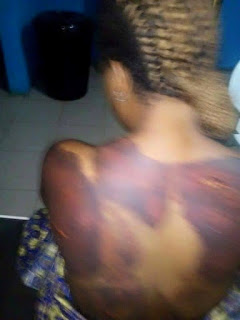 “I think Nigerian army should be called to order fast…this lady
was brutalised by 174 battalion Ikorodu all because she challenged a soldier
that slapped her brother….this is becoming too much and barbaric likewise….please
share till it gets to buratai….I don’t want to believe our soldiers are
animals…kilode”
Recall that, similar event occurred on Monday, January 31, 2017,
when a Nigerian soldier brutally dehumanized a Nollywood actress, Ebere Ohakwe.
The video hit the internet as the soldier was later sentenced to 28 days
imprisonment with hard labour and no pay. 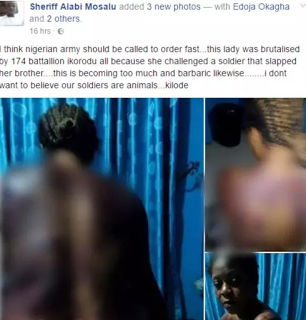 7 reasons why we believe French diplomat is dreaming – IPOB