By Andre Falana On Mar 15, 2017
Share
Join Us On Telegram
Nollywood actress Daniella has finally broke silence about on
her connection with Apostle Suleman.
Okeke’s name was mentioned several times in the Apostle
Suleman’s marriage and sex scandal with Stephanie Otobo.
It was reported that the Nollywood actress’ home and
Mercedes Benz SUV were bought for her by the man of God. It was also alleged that
she had been in an illicit relationship with the Apostle.
Related Posts

Okeke said she has been in talk with her lawyers and they
will respond on her behalf.
She typed: “In
adherence to my lawyers counsels, I ve been mute since I read some funny
fallacies, my lawyers will do the talking.. But for sure a lot of people will
go down for getting my name involved in something I have no business with. So
be careful of what you say or write. My being mute is for legal
reasons!!!” 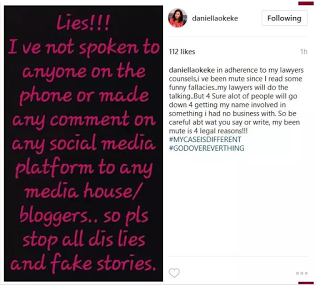 Photos: For the first time in 58 years as fresh tomatoes enters Lagos from Kano by RAIL

I still want to build a home with Lanry Gentry – Mercy…