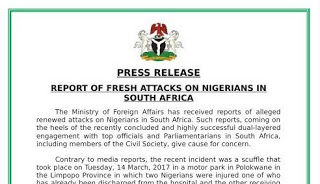 The Nigerian Federal Ministry of Foreign Affairs has acted
in response to reports of renewed attacks on Nigerians living in South Africa.
In a statement released by the spokesperson of the Ministry,
Mr. Clement Aduku, last night, March 22, 2017, the office said the reports of new
attacks demands great concern as it’s just few weeks ago that an attack which caused
severe damage to Nigerians and their businesses was launched.
Related Posts

The statement said that an argument between two Nigerians
and some South Africans led to a fight at a motor park in Polokwane at the
Limpopo province on March 14, 2017.
The Nigerians were injured and moved to a hospital. Though one
has been discharged but the second person is still receiving medical attention.
The businesses of the two Nigerians were however destroyed.
The statement further said, though, this act cannot be
classified as a xenophobic attack. 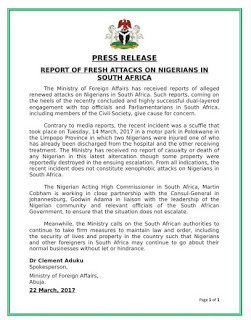 Actress, Iyabo Ojo finally open up on her relationship with Apostle Suleman Johnson