Video: Nigeria is a country of savages and animals, it does not obey law – Nnamdi Kanu

By Andre Falana On Mar 2, 2017
Share
Join Us On Telegram
Related Posts 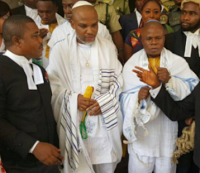 Nnamdi Kanu who is the
leader of the Indigenous People of Biafra, IPOB, has described Nigeria as a
country of savages and animals.

He issued this statement on Wednesday, March 1, 2017
following the dismissal of six charges out of eleven charges filed against him by
the Federal Government.

Justice Binta Nyako of the Federal High Court in Abuja,
Yesterday threw out six charges filed against him and three others by the
Federal Government.
Justice Nyako held that the six charges does not have enough
proof of evidence by prosecution adduced against the defendants. Though, the court sustained five other charges filed against
the IPOB leader and three other pro-Biafra agitators who are Benjamin Madubugwu,
David Nwawuisi and Chidiebere Onwudiwe
Speaking to the Newsmen and his supporters after the court
process, Kanu, who dressed in a Jewish apparel, said that Nigeria is a country that does not obey the law.
Find the Video below:
biafraIPOBJudiciarylawNewsNigeriaNnamdi Kanu
Share