By Andre Falana On Mar 20, 2017
Share
Join Us On Telegram
In reaction to the alleged University scandal reported by
Sahara Reporters that Senator Dino Melaye did not graduate from ABU Zaria, the embattle
senator has used his tweeter handle to respond to the media outfit that
published the matter.
According the chains of tweets posted by Sahara Reporters, Senator
Melaye did not graduate from the Ahmadu Bello University where he had his first
degree.
Read also: Senator
Dino Melaye failed in the university
This accusation follows the rejection of confirmation of the
Ag. Chairman of the EFCC as a full time Chairman of the commission.
Senator Dino Melaye has also responded by posting some
tweets too on his twitter handle. Read the tweets below:

“Sahara Reporters please sue me and ABU if it is true that I did not
graduate from Zaria. Tell Magu to arrest me and prosecute me.

“SR you and your fake documents. I’m presently a student of ABU
pursuing my 7th degree. Go round all the UNIS I attended in digging more.

“I can’t be cowed. Still waiting for Sahara to indict me. What happened
to the foreign account you reported I have. Na una go tire.

“Will not be surprise if Sahara Reporters say I’m not a Nigerian.
Shame!”
Read also: Senator
Dino Melaye failed in the university 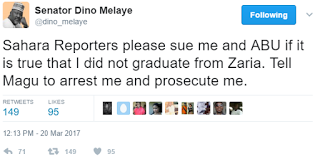 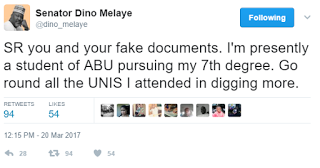 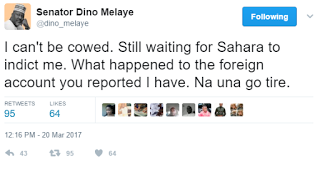