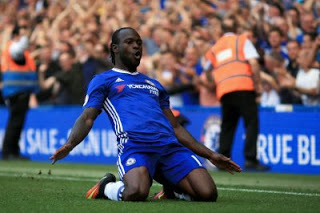 After an impressive show of consistency on the pitch, the 26-year-old Victor Moses of Chelsea FC has been rewarded a two-year extension which he agreed to sign.

The Chelsea Star’s consistency has earned a first team place and helped him to an important figure in Antonio Conte’s team. The new contract signed will take him through to 2021.
Victor Moses joined the Blues in 2012 but failed to secure a place in the first team until this season, and since then he had been moving from one club to another on loan, the said clubs includes Stoke City, Liverpool and West Ham.
Related Posts

The Nigeria international could not hide his happiness at committing his future to the Stamford Bridge club after signing the 2-years extension.
Moses said: “I feel very excited. I’m delighted to be here for another few years now and to sign a new deal.”
“Now it’s time to concentrate on the team and keep working hard to make sure we win games and try to win the Premier League this season.

“We’re having a great season, I’m enjoying my football and we have a good manager here that has given every single one of us confidence. I just want to keep on enjoying it and working hard for the team.”

Chelsea is currently the league leaders with 10 points clear of the closest challengers, Tottenham Hotspurs. Their next match will be against West Ham on Monday.
Moses has scored three league goals this season for Chelsea and has crossed more balls for the team than any other player in the team.
ChelseaNewsNigerian International.SportVictor Moses
Share