By Andre Falana On Mar 21, 2017
Share
Join Us On Telegram
It has been disclosed
that the Medical doctor, Allwell Orji who had on Sunday, March 19, 2017 committed
suicide by jumping into the lagoon from Third Mainland Bridge had made an
effort to commit suicide several times before the recent event. 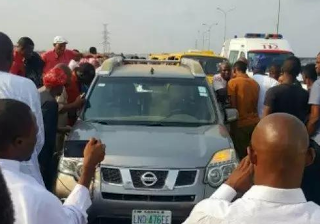 The Sun News reported that, Dr Orji had attempted jumping
down from the family’s two-storey house four years but failed due to their neighbours’
interventions.
Read also: Mother
of medical doctor who committed suicide refuses to believe her son is dead
A man who preferred anonymity said: “Four years ago he attempted to kill himself and, thereafter, had
tried doing so on a number of times, since then, his family had been monitoring
him.

“We don’t know the
kind of sickness he was suffering from, but we knew he was being monitored.

“That was why he was
assigned a driver to take him around.”
The doctor and his family had stayed on the street, Odunukan
Street, Ebute-Ejigbo, off Morroco Road, close to University of Lagos for years
and then lost his dad four years ago.

“He was such a gentle
boy, who never made any trouble.  His
family has lived on this street for long; his father died four years ago.

“Perhaps the driver
who drove him didn’t know about his condition because he was engaged about
three months ago.”
A different neighbour also said, some concerned persons had
gone to the Police begging for the driver’s release from detention as he was guiltless
and had no part in his former boss’s death.
According to Daily Sun, some of his colleagues at Mount
Sinai hospital where Allwell worked before taking his life were interviewed.
Related Posts

Speaking to the reporters, the Chief medical director, Dr.
Adedoyin Adeniran, said nobody can confirm that he is dead until his body is
found.
“We don’t want to
conclude that he is gone, more so when his body has not been found. It is only
his family that can speak on that,” Dr Adeniran said.
A non-medical staff who pleaded for anonymity spoke wonderfully
about the doctor recounting that he was the patients’ favourite.
Read also: Mother
of medical doctor who committed suicide refuses to believe her son is dead
She stated that: “Dr.
Orji was such a dedicated person. He was the firstborn of his family. He was a
thoroughbred doctor who paid profound attention to the very minute things in
Medicine. He was such a quiet person and at the same time very active.

“He was most preferred
by our patients. In fact, when some patients came here and he had not arrived, they would wait for him. He was sure to get to the root of things by asking
penetrating questions.

“That was his trademark
and why he was so much loved.

“Last Friday, he was
here and we all played with him. We jocularly asked him to go and eat but he
said he was going to see his patients in the ward. But we literally forced him
to do so.”
The General Manager
of Lagos State Emergency Management (LASEMA), Adesina Tiamiyu, who was at the place
of the suicide incident, said they were still probing the waterways.

“We have expanded our search to go further
than where it happened. We engaged local fishermen and divers. Also assisting
are the Lagos Ferry Services and the Lagos Waterways Agency patrol boats, which
were deployed to the waterways. We have informed the residents to look out for
floating bodies, and we have also contacted the family and they are still in
shock,” Tiamiyu said.
A LASEMA official also at the place of the event said the
distance at which he jumped into the lagoon will instantly make him unconscious
upon hitting his head in the water because the water would feel like stone when
it make contact with his head.
She also stated that they have dropped the mind-set of only a
rescue mission but have added that of recovery mission.
Read also: Mother
of medical doctor who committed suicide refuses to believe her son is dead
LagoonLagosMedical DoctorNewsSuicide
Share