By Andre Falana On Mar 31, 2017
Share
Join Us On Telegram
On Wednesday, March
29, 2017, Reports says that the Joint Admission and Matriculation Board, JAMB
was going to stop the computer based testing, CBT mode of conducting the
Unified Tertiary Matriculation Examination, UTME. 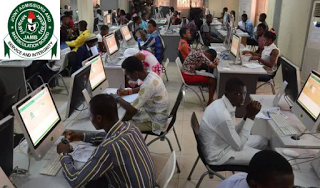 It was reported to be dumping the CBT due to the low
computer literacy level of candidates across the nation.
In an effort to make CBT responsive and friendly, JAMB announced
the use of 8 keys without a mouse
JAMB also debunked the report that it would be abolishing
the CBT mode, describing it as misrepresentative while also reaffirming its
determination to carry on all its examinations using the mode.
The spokesperson of JAMB, Dr. Fabian Benjamin, said in a
statement issued in Abuja, on Thursday, March 30,  that the headline: ‘JAMB dumps CBT, adopts eight keys’, was misleading and capable of triggering
fear, misrepresentation and confusion in the minds of Nigerians principally the
candidates preparing to take the 2017 UTME.
Benjamin said: “At the
meeting, the JAMB Registrar, Prof. Is-haq Oloyede, restated the determination
of JAMB to continue to innovate on policies that will ease the phobia for CBT,
one of which is the introduction of the use of 8 keys without a mouse and
nowhere was the issue of dumping CBT contemplated.”
According to Dr. Fabian Benjamin, the CBT is still the only
mode for the forthcoming UTME.
The use of 8 keys without a mouse was introduced by JAMB to
make the CBT mode friendly.
Related Posts

The 8 keys are as follows;
A – for choosing
option A in response to questions
B – for choosing the
B option
C – represents option
C
D – for selecting
option D
P – represents
previous question
N – is for next
question
S – is for submit
R – is for reverse
It was also earlier reported that candidates sitting for
this year UTME will spend two hours instead of the contemporary three hours to sit
for the exam.
Currently, a total of 240,000 applicants were said to have
registered for the examination which is to take place on May 20.
Yet, candidates have been finding it difficult to register
for the examination. Many complains about invalid ePINs.
However, JAMB stated that the cause of the invalid pin being
experienced by candidates was due to the rate at which candidates buys ePINS
without first creating their profile, and providing incorrect email address at
the bank teller and unexpected technical issues in the PIN vending system.
EducationJAMBNewsProf. Ishaq Oloyede
Share

Livestreamed VIDEO showing a woman fall to her death. Suicide or Murder case?

How to check your 2017 JAMB result