Join Us On Telegram
The Inspector-General of Police, Ibrahim Idris, on Friday, March 24, 2017 has justified the arrest of only yoruba suspects over the recent clash between Yoruba and Hausa communities in Ile-Ife of Osun State, which led to the death of about 46 persons.

Also read: UPDATE (Photos):Clash between Hausas and Yorubas in ile-Ife, Osun state
The IGP said crime does not have tribe or identity.
Speaking with the State House correspondents following his briefing with President Muhammadu Buhari over the security situation around the country. 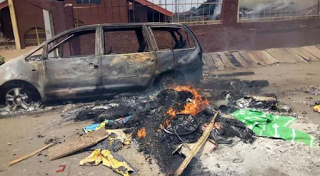 The police have been in a circle of criticism for arresting and parading about 20 Yoruba persons, which included a monarch, over the clash while no single Hausa or Fulani person was arrested, even though the two groups involved in the fight were said to have had casualties.
The pan-Yoruba group, Afenifere; and the Oodua People’s Congress (OPC) are among sets and persons that have been criticising the police over the development.
On Thursday, the OPC had in a statement released by its founder, Dr Frederick Fasheun, given the Federal Government, FG, and the police 48 hours to arrest the Hausa/Fulani persons involved in the crisis.
However, Idris defended the steps taken by the police, saying crime had no tribes .
He said the police would not be relunctant to apply the law once criminal cases were confirmed against individuals, irrespective of their tribes or individualism.
He said: “You know we are police officers. Crime has no tribe. If you are a criminal, you are a criminal.

“Crime has no face. We don ’t look at crime in the identity of where you are coming from.

“As far as you are a criminal and the police find you wanting , we apply the law.”

He said investigation had disclosed that the crisis started with a disagreement between two persons selling food along the road.
On the killings in Zaki Biam, Benue State, the IGP said he had deployed police special units to apprehend one of the men declared wanted linked with the case.
Also read: UPDATE (Photos):Clash between Hausas and Yorubas in ile-Ife, Osun state
Idris said: “We have deployed Mobile Police Unit on 16 th of this month and of recent that incident that happened at Zaki Biam, there are allegations on that Gana, one of the wanted men.

“This man has been on the police wanted list and I have decided to deploy some special unit to go after him and get him by all means.

“Like I said earlier, definitely , we are going to get that man.”


Idris also said the latest attack was not carried out by Fulani herdsmen.

“No, I don ’t think it was Fulani herdsmen. It was an activity of a criminal using some of his criminal gangs in the state to harass people.”

The police boss also said the issue in Kogi State was not about abduction.
He stated that it was a case of militants who were bent on disturbing the peace of the state.
He swore that the police would take care of the situation.
Related Posts

He said he used the opportunity of his session with President Buhari to update him on police’ s efforts to ensure security across Nigeria.
He said: “The meeting was to share with the President our deployment strategies on the ground; our deployment in some of these flashpoints all over the country , especially Benue , which is the current one.


“We also talked about deployment in Kaduna State , which started some few weeks back and deployment in Ile-Ife , where we have a lot of police officers. Special squads and investigation team are on the ground to conduct investigation on the matter.”

The IGP said the President had given him directive to ensure that all facilities at police’s custody were used to make sure that the security challenges are brought under control as soon as possible.
He said he promised President Buhari that he would ensure that was done.
On another hand, the OPC, some Yoruba elders, and some Igbo men, Aka Ikenga, have criticised Idris’ defence of the controversial arrest, describing it as capable of destabilising the country’s unity.
Ayo Adebanjo, who is a Yoruba elder stateman has question the IGP’s defence, saying the arrests were biased, in favour of the Hausa/Fulani people.
He said: “It is unfortunate that the person who calls himself the IGP has no apology for doing injustice . If he agrees that two sections were fighting and two sections suffered casualties, is he saying the indigenes of Ile-Ife killed themselves and destroyed their own properties?


“Yes, a criminal is a criminal but I am asking him, are the criminals only from one side when there are victims from both sides?”


Adebanjo, therefore, asked northerners to speak with the President and the IGP ‘to stop playing with fire.’


“This is not the time for ethnic crisis in this country because we have a lot on our hands. Those of us who are sincere about having peace in the country are worried about this, but it appears that the oppressors are not bothered.


“It is a shame and I am calling on northerners, particularly the good elements among them , to warn these people not to provoke the Yoruba people,”  Adebanjo said.
A former Minister of Education, Prof. Tunde Adeniran, said he had not read Idris’ justification, but stated that the “IGP’s job is to protect everybody irrespective of where they come from.”


“And in the execution of his duties, one would expect him to be very impartial. He was not appointed as the IG of a section of the country , but IG for the Nigerian nation.”
Oscar Onwudiwe, who is a lawyer and the founder of Aka Ikenga, described the situation as not only worrisome but dangerous against to the fragile unity and stability of Nigeria as a whole.
Onwudiwe said with the one-party arrests made by the police and the comments of the Inspector General of Police, it’s obvious that there were instructions from above not to touch Hausa/Fulani persons involved in the Ile-Ife clash.
He said: “The latest incident is a confirmation of what many of us already know. Since this administration came on board, there has been a clear difference in how a certain people are treated. The conduct and statement of the IGP go to show that indeed, there is an order from above not to touch the Hausa/Fulani involved in the Ile -Ife crisis . Otherwise I don ’t know why only the Yoruba should be arrested after the clash.


“Before Buhari came on board, herdsmen had been moving their cattle around different parts of the country without causing problem, but going by the level of destruction they have caused over the last two years, it is as if there is a new agenda to silence anyone who raises a voice against their nefarious activities . Under Buhari , it is a clear case of some animals being more equal than others.”


The National Coordinator of OPC, Gani Adams, has also faulted the IGP over his defense of the arrest of only the Yoruba side in the crisis.
He said that Idris should know it was “impossible to defend such an arrest ” when two ethnic groups were involved in the fight.
While urging President Buhari to warn the IG, the OPC coordinator fingered out that if such could happen in Ile-Ife, the home of the Yoruba race, then worse things could occur in other towns.
Adams said, “If we don’ t raise our voice now, worse things might happen. That is why we are calling for restructuring because we cannot continue like this. The Hausa people operate with psychological confidence because when they kill people, nothing happens.

“Look at the case of Mile 12 in Lagos last year, where many Yoruba people were killed; why didn’t the IGP parade Hausa people like he’s doing to Yoruba people now? What of Agatu in Benue where hundreds have been killed so far?


“We are not against the police arresting Yoruba people who were found culpable , but we are saying there should be no bias. If there is no evidence of the Yoruba person that was killed, is the police saying Ile-Ife people also burnt their own houses?”

After the clash in Ile-Ife, Kayode Aderanti, who is the Assistant Inspector-General of Police, Zone 2, on Thursday, March 23, held a security meeting with some leader of ethnic group living in Sagamu, Ogun State.
The meeting was themed: “The need to live together in peace.”

He said, the move was a necessary as a proactive measure to encourage peaceful co-existence among the various ethnic groups in the state.
Citing Ile-Ife crisis, he said: “Sagamu has the largest concentration of ethnic groups in the country . We want everyone to live in peace, we want you to live as brothers and sisters.”
ArrestCommunity clashCrisisEthnic crisisHausaIle-IfeNewspolice
Share

President Muhammadu Buhari’s Health: Gloating is of no value